The International Community Must Work for Peace 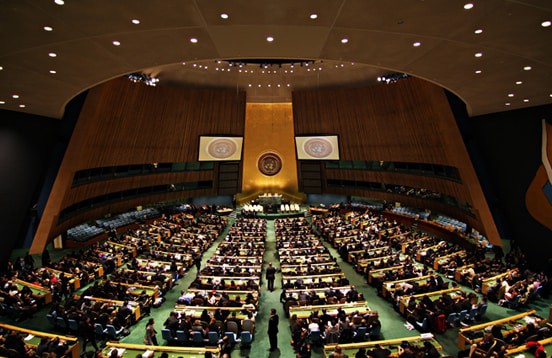 The Obligation of the International Community to Advance Peace and Development

AN URGENT CALL FOR PEACE AND DEVELOPMENT

Centesimus Annus ends its section on the state and culture with an urgent call on the international community to develop alternatives to war. Also, recognizing that another name for peace is development, it calls for a concerted, worldwide effort to promote development. (Pope St. John Paul II, 48)

In 1999 Pope St. John Paul II identified the need for the international community to actively intervene in human conflicts, despite the fact that issues of sovereignty might be involved.

“I call on the leaders of the Nations and on all people of good will to come to the aid of those involved—especially in Africa—in cruel conflicts, sometimes prompted by external economic interests, and to help them to bring these conflicts to an end.” (Pope St. John Paul II, 11)

A call strongly re-iterated by Pope Benedict XVI in (Caritas in Veritate).

Indeed, at the UN in 2008, Pope Benedict XVI made a direct and, perhaps, not fully appreciated call on the international community when he said: “Every State has the primary duty to protect its own population from grave and sustained violations of human rights, as well as from the consequences of humanitarian crises, whether natural or man-made. If States are unable to guarantee such protection, the international community must intervene”.

And, this intervention “should never be interpreted as an unwarranted imposition or a limitation of sovereignty. On the contrary, it is indifference or failure to intervene that do the real damage.” (Meeting with the Members of the General Assembly of the United Nations)

“If States are unable to guarantee such protection, the international community must intervene”.

Pope Francis has also endorsed this Catholic approach in his address to the United Nations in September 2015 when he said:

“As I wrote in my letter to the Secretary-General of the United Nations on 9 August 2014, ‘the most basic understanding of human dignity compels the international community, particularly through the norms and mechanisms of international law, to do all that it can to stop and to prevent further systematic violence against ethnic and religious minorities’ and to protect innocent peoples.” (Meeting with the Members of the General Assembly of the United Nations)