A Deeper Examination of the Dignity of the Human Person

In scripture, we learn that man was created to be a social being, with abilities and responsibilities:

“The LORD God formed man out of the clay of the ground and blew into his nostrils the breath of life, and so man became a living being.” (Genesis 2:7) 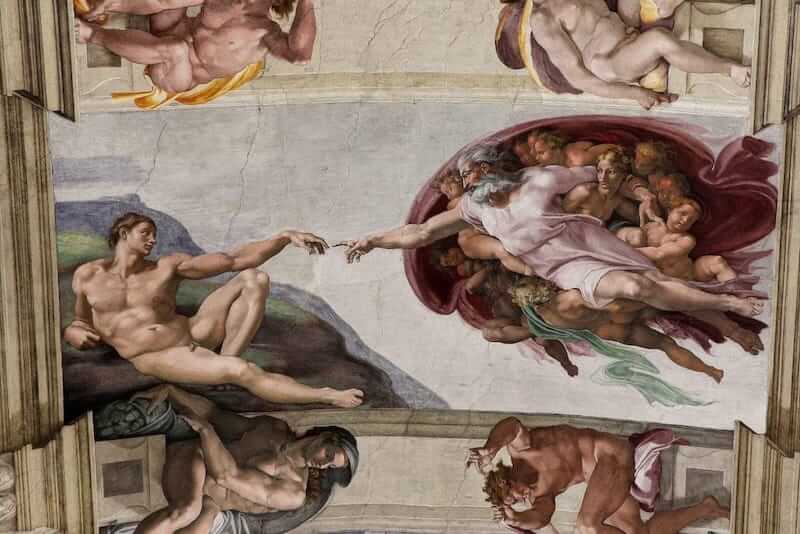 We are made in God’s Image and Likeness. From Him we receive our human dignity.

And, “Then God said: “Let us make man in our image, after our likeness. Let them have dominion over the fish of the sea, the birds of the air, and the cattle, and over all the wild animals and all the creatures that crawl on the ground.” God created man in his image; in the divine image he created him; male and female he created them.” (Genesis 1: 26-27)

We can find this expanded and reflected upon in the bible and the teaching tradition of the Church. For example we learn “You have made him little less than a god; with glory and honor you crowned him, gave him power over the works of your hand, put all things under his feet.” (Psalm 8)

“Beyond the rights which man acquires by his own work, there exist rights which do not correspond to any work he performs, but which flow from his essential dignity as a person.” (Pope St. John Paul II, 11)

While St. Gregory of Nyssa, in the 4th century, said: “God did not make the heavens in his image, nor the moon, the sun, the beauty of the stars, nor anything else which you can see…You alone are made in the likeness of that nature which surpasses all understanding…Nothing in all creation can equal your grandeur.” (The Image of God in Humanity: Commentary on the Song of Songs, Homily) The human person, an intelligent being who has a soul, has been endowed with the ability to know and love God freely, thereby having a privileged place in the order of creation.

DOES HUMAN DIGNITY HAVE ANY OTHER “SUPPORTS”?

Natural law can be described as a law whose content is set by nature and holds everywhere – regardless of place or time and it is separate from a man made or divine law.

Pope Leo XIII commented: “The natural law is written and engraved in the soul of each and every man, because it is human reason”. (Libertas Praestantissimum, 8)

Pope Benedict XVI tells us, “Natural moral law is a guarantee for legislators to show true respect both for the person and for the entire order of creation. It is the catalyzing source of consensus among peoples from different cultures and religions, enabling differences to be overcome by affirming the existence of an order imprinted into nature by the Creator, … an authentic call to use ethical-rational judgment to seek good and avoid evil”. (Address To participants in the General Assembly of the Pontifical Academy for Life)

IS HUMAN DIGNITY AN INALIENABLE RIGHT?

“Beyond the rights which man acquires by his own work, there exist rights which do not correspond to any work he performs, but which flow from his essential dignity as a person.” (Pope St. John Paul II, 11)

And: “No one can take away this human right” (Pope St. John Paul II, 9); not even the majority of a democratic political body, because this dignity does not arise from the state or the will of the governed.

This concept is the core of Catholic social teaching going back to its earliest articulation by Pope Leo XIII in 1891 when he wrote “the State is bound to protect natural rights, not to destroy them” (Rerum Novarum, 135) and has been reiterated by Pope Benedict XVI when he wrote “Fundamental rights are neither created by the lawmaker nor granted to the citizen. The value of human dignity…takes precedence over all political decision-making”. (“Europe and its Discontents”, First Things, January 2006)

ARE THERE ANY EXCEPTIONS TO THIS INALIENABLE RIGHT OF HUMAN DIGNITY?

“When we invoke respect for the dignity of the person, it is fundamental that such respect should be complete, total and unimpeded, … recognizing that we are always dealing with a human life”, said Pope Benedict XVI. “Of course, human life has its own development and the research horizon for science and bioethics remains open, but it must be reiterated that when dealing with matters which involve human beings, scientists must never think they are dealing with inanimate and manipulable material. In fact, from its first instant, the life of man is characterized by the fact of being a human life, and for this reason it has, always and everywhere, its own dignity”. (Address To participants in the General Assembly of the Pontifical Academy for Life)

“When God is not present, man is not respected.” (Pope Benedict XVI)

WHAT ARE MY RESPONSIBILITIES REGARDING HUMAN DIGNITY?

“[T]he human person must work, must involve himself in domestic and professional concerns, to be sure, but he has need of God before all else, who is the interior light of love and truth. Without love, even the most important activities lose value and do not bring joy. Without a profound meaning, everything we do is reduced to sterile and disordered activism.” (Pope Benedict XVI)

“The lay faithful[‘s]…responsibility, in particular, is to testify how the Christian faith constitutes the only fully valid response…to the problems and hopes that life poses to every person and society. This will be possible if the lay faithful will know how to overcome in themselves the separation of the Gospel from life, to again take up in their daily activities in family, work and society, an integrated approach to life that is fully brought about by the inspiration and strength of the Gospel.” (Synod of Bishops, XIII Ordinary General Assembly, The New Evangelization for the Transmission of The Christian Faith, 12)

But, perhaps most importantly, “By living this new life we are not only interiorly transformed, but we also change the world around us.” (Pope Benedict XVI)

WHAT ARE THE THREATS TO HUMAN DIGNITY?

“[T]here is a growing inability to situate particular interests within the framework of a coherent vision of the common good. The latter is not simply the sum total of particular interests; rather it involves an assessment and integration of those interests on the basis of a balanced hierarchy of values; ultimately, it demands a correct understanding of the dignity and the rights of the person” (Pope St. John Paul II, 47)

Our understanding of the prime importance of Human Dignity is made extremely difficult today because of two, opposing viewpoints: “One maintains that human life is in the hands of man, and the other recognizes that it is in God’s hands.” Pope Benedict XVI tells us only the second view ensures that human rights are protected:

“When God is not present, man is not respected.” (Pope Benedict XVI)

And, we must remember, “Man is not the owner of life, but the custodian and caretaker.” (Pope Benedict XVI)

Pope Benedict XVI points out that, “Today, perhaps more persuasively and with more effective means than in the past, human dignity is threatened by aberrant ideologies, assailed by the misguided use of science and technology, and contradicted by widespread incongruent lifestyles.” (Communiqué Announcing the 40th World Peace Day, 13 July 2006)

“Moreover, propaganda and the growing acceptance of disordered lifestyles contrary to human dignity are weakening the hearts and minds of people.” And, “All this represents a threat to humanity, because peace is in danger when human dignity is not respected…any offence to the person is a threat to peace; any threat to peace is an offense to the truth of the person: The human person is the heart of peace.” (Pope Benedict XVI, Communiqué Announcing the 40th World Peace Day, 13 July 2006)

In fact, “A true and stable peace presupposes respect for human rights. Yet, if these rights are grounded on a weak conception of the human person, how could they not fail to be themselves weakened?” (Pope Benedict XVI, 12)

IS THERE A FUNDAMENTAL PROBLEM WITH THE MODERN CONCEPTION OF “RIGHTS”?

A ‘Natural Right’ is right derived from nature, universally, applying to all people, and does not derive from any laws of any specific society. Therefore they exist inherent in very human being.

Human rights are natural rights to which all humans are entitled to. These rights are based upon the recognition of the inherent dignity and of the equal and inalienable rights of all members of the human family, which can be known through human reason.

On the other hand, ‘Civil Rights’ can be seen as fundamental normative rules according to a legal system, social convention or an ethical theory can change over time and place, and can be at odds with natural rights and human dignity.

“[R]ights are proposed as absolute, yet the foundation on which they are supposed to rest is merely relative. Can we wonder that, faced with the “inconvenient” demands posed by one right or another, someone will come along to question it or determine that it should be set aside? Only if they [human rights] are grounded in the objective requirements of the nature bestowed on man by the Creator, can the rights attributed to him be affirmed without fear of contradiction.” (Pope Benedict XVI, 12)

“[T]he State is bound to protect natural rights, not to destroy them”. (Rerum Novarum, 135)

WHAT ARE THE DUTIES OF LAW-MAKERS REGARDING HUMAN DIGNITY?

“Recognizing human dignity as an inalienable right has its first foundation in that law – unwritten by the hand of man but inscribed by God the Creator in man’s heart – which all juridical systems are called to recognize as inviolable, and all individuals to respect and promote. Without the basic principle of human dignity it would be difficult to find a wellspring for the rights of the person, and impossible to reach ethical judgments about those scientific advances which have a direct effect on human life”. (Pope Benedict XVI)

Pope Benedict XVI highlights “the commitment that must be shown in the various areas of society and culture in order to ensure that human life is always recognized as an unalienable subject of law, and never as an object dependent on the whims of the powerful”.

In this context he pointed out that “history has shown how dangerous and damaging a State can be when it proceeds to make laws that touch the person and society, while itself claiming to be the source and principle of ethics”. (Address To participants in the General Assembly of the Pontifical Academy for Life)