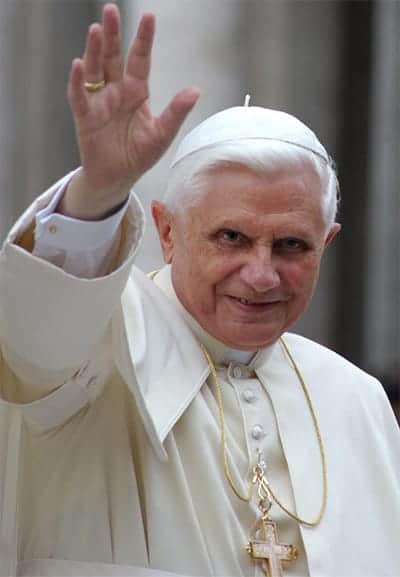 We join the universal Church in mourning the death of Pope Emeritus Benedict XVI.

We join the universal Church in mourning the death of Pope Emeritus Benedict XVI.

Reigning from 2005-2013, Pope Benedict XVI gave of his many gifts—as a theologian, a scholar, and a man of faith—in service of the Church. His pontificate was not an easy one, confronted by many challenges with many issues needing to be addressed.

Throughout, Pope Benedict continued to provide an example of equanimity, of service and of boundless faith in Jesus Christ. His final act as pope was his remarkable resignation from the Papacy in 2013–setting a further example of humility and sense of selflessness for the Church.

We would like to particularly highlight that Pope Benedict’s election also marked a transition point in the life of CAPP. He was the first Pope to follow our sainted founder, Pope John Paul II.

Pope Benedict’s writings on Catholic Social Teaching, found prominently in Caritas in Veritate and Deus Caritas Est, among other documents, provide us with unique and new examples of how the faithful must address the challenges of modern society.

The concepts of intergenerational solidarity, the prevention of environmental degradation, and further promotion of the bonds of human solidarity were all promoted in the late Pontiff’s extraordinarily insightful writings and speeches. His fidelity to the vision for CAPP set forth by his predecessor was a great gift to us all.

Eternal rest grant unto him, O Lord. May perpetual light shine upon him. May he Rest in Peace.

Saints of God, pray for him!

We invite you to read some of Pope Benedict’s writings: Caritas in Veritate and Deus Caritas Est.

Over the coming year, CAPP will release articles with Pope Benedict XVI’s profound insights on the pressing issues of our age.